In this project, I will build upon my prior research concerning the influence of the Christian theme of ‘Annunciation’ on the perception of landscape within the Florentine Republic (12th – 15th century). This research displayed, amongst other things, how a building can be regarded as a landscape, as long as it allows for the possibility to orientate the walker in time and space.

For this project, I will restrict myself to small Romanesque churches, which are found over the entire former territory of the Florentine Republic. Some of these churches form a spatial representation of the annunciation due to their relationship with the natural environment. These small churches, pieve, are literally landmarks in nature, as they align to the East, the orient, from which the word ‘to orientate’ is derived. Therefore, one can imagine them as enormous compass needles. Often the Virgin is linked anthropomorphically to these churches and metaphorically called an abitacolo, meaning the casing of a compass needle.

The prototype of the Tuscan church has a simple square facade with a slightly sloping double pitch roof. The ground surface has a dimension of approximately 1:2, yet sometimes 1:3. Originally, this simple ‘box’ did not have any windows or a tower. Within the facade of the church, above the only door, there was one, round opening: the oculus. This was the church’s only ‘window’, allowing in a very limited amount of light. Consequently, this architecture portrays a striking resemblance to a photo-camera, with the oculus as the opening of a giant camera obscura or pinhole camera.

Within this project, I will make photographs using a homemade camera obscura with the same dimensions as the prototype of these small Romanesque churches.

The camera obscura will be placed in front of the facade of these churches in order to make a photograph of their surroundings, capturing what is imaginarily projected inside the church. I will therefore register the image of the landscape as the building sees it through its one, round window. The composition or viewpoint becomes entirely determined by the orientation and spatial dimensions of the church.

This research reflects upon time and space, the magic of a place (Genius Loci), the slowness of an image and the structures we project upon our surroundings in order to make them readable and comprehensible. Architecture is approached here as an observatory, a tool which provides the structure to create a landscape. The building (camera obscura) also becomes a metaphor for what comes in (introspection) and for what goes back out (view). Additionally, a dialogue stressing tension between photography and painting will be indirectly addressed. 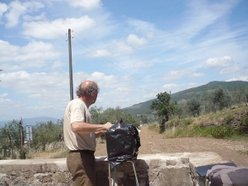 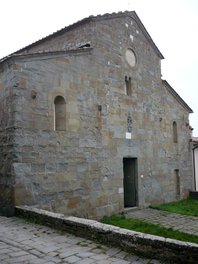